by Joseph A. Tringali

Calkins Harbor Publishing’s Harbor of Dreams, continues the stories of the lives and loves of the people who live at Cap’n Kelly’s Marina in the small, often bypassed town of Calkins Harbor, Florida. 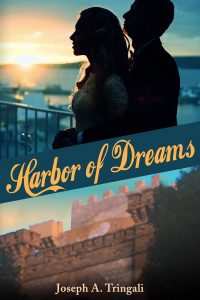 What happened between Jack’s mother and Marilyn’s father?  Did they really run off to New Orleans together?  So where does that leave Marilyn and Jennifer and their newly-remodeled restaurant — that’s named after him!  (Actually it seems the place is being continuously remodeled by Jennifer!) What about Les Leslie?  Why is he always so danged concerned about his privacy?  Did something in his past force him off life’s path?  Does Les use Margaret Calkins’ legacy to find his lost love still waiting for him in Italy?  After all, it’s been 40 years!

How about that guy Sibby Maggio, living — well, existing — on the tri-cabin known as the Roach of the Marina.  And where do Jim Lacey and Eddie Miles fit into the picture?  Everybody at Cap’n Kelly’s Marina found refuge there when life handed them problems that seemed overwhelming. What were theirs, and what dreams did they have for their lives?

Now, it seems, that many long-abandoned dreams are coming true for a whole lot of people.  Is it due to the still-loving, guiding hand of Margaret Calkins, looking after them from her place in the great beyond?  Or is it because of the energy and indomitable will of her granddaughter Jennifer — aided and abetted by Marilyn Dupré Townsend, the “sister” Grandma herself chose to be Jennifer’s steadying influence?

How  is R.J. Meacham doing?  Is he still devoted to “trial law” in spite of his mentor, Jack Townsend’s, advice?  What happens when R.J. learns what a “sewer” it can become when a witness commits perjury.

These questions and more are answered in this wonderful sequel that is just perfect for some cozy reading.  Don’t miss this book!  Coming this month to Amazon.com.