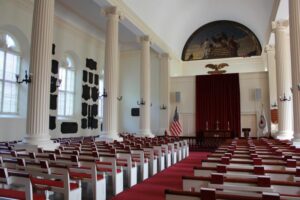 The first Cadet Chapel was constructed on the grounds of the United States Military Academy at West Point, NY, in 1836. Its unadorned windows, severe Gothic design and plain white walls accentuate both its ecumenical use and its military heritage. Fittingly, the only decoration other than the “Peace and War” mural by Robert W. Weir, an Academy professor from 1833 to 1876, consists of black marble tablets, mounted around the walls; each tablet bearing in gold the name, rank, and dates of birth and death of a general officer of the Revolutionary War. High up in a rear corner of one wall, almost out of sight near the railing of the choir loft–and, in fact, cut off by the railing–is a solitary plaque which carries only the rank and date of birth of a general officer of that war. The name and date of death have been conspicuously removed. It
Read More