Every December we’re swamped with images of America’s greatest salesman – Santa Claus – hawking everything from fast food to automobiles. In the deluge of media hype, there are always a few stories reminding us that the idea of “Santa Claus” evolved from St. Nicholas, and one or two of those stories might go so far as to explain the real Nicholas was a kindly bishop of Myra (today known as Demre and located in modern-day Turkey).

But how many people know that St. Nicholas is also the patron of sailors and ships, offering safe voyage and protection from storms? 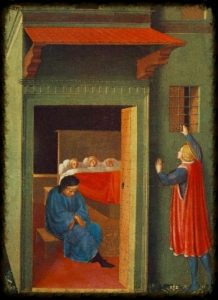 The Legend of St. Nicholas begins with a poor family of Myra who could not provide dowries for three daughters. Since the girls were unable to marry, they would have to be sold into slavery. It is said that Nicholas saved the day by riding past the house late at night and throwing three bags of gold coins through an open window – bags which, by a miracle, landed in shoes and stockings that had been left out to dry next to the fireplace.

But St. Nicholas does more than throw coins through open windows.  He is also the patron of 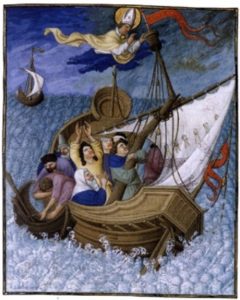 sailors and ships, offering safe voyage and protection from storms. Traditionally, German sailors who survived a shipwreck brought him a piece of sailcloth as an offering, and, in fact, much of the world knows St. Nicholas as “the sailors’ friend.”  Legend says that long ago a ship in the Mediterranean Sea was caught by a storm and forced into shallow waters where it became grounded. The sailors were unable to maneuver the vessel back into deeper water and called on Nicholas for aid.

The Saint appeared among them and gave the sailors a helping hand, fastening the lines holding the mast and using a pole to pry the ship away from the threatening rocks. As soon as the boat was freed, the Saint vanished. Even today, Greek sailors wish each other luck by saying, “May St. Nicholas hold the tiller.”

So after you’ve put up the last of the decorations, and you’re basting the turkey one final time while you watch the kids unwrapping gifts under the tree, give a thought to Saint Nicholas. May his hand be on the tiller of the ship carrying you and your family on your voyage through the New Year!

« What is the correct arrangement of flags on the Yacht Club masthead?
Freezing the Balls off a Brass Monkey »