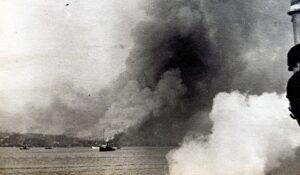 Mixing signals in your club, your business, or—for that matter—your marriage, does not work. To be successful at anything you have to choose one course and stay on it. History is full of examples of tragedies that resulted from mixed signals, but few are more horrific than that which befell the City of Halifax, Nova Scotia, when the entire city was obliterated in the blink of an eye.

On December 6, 1917, the French ship Mont-Blanc was entering Halifax harbor loaded with 62 tons of gun cotton, 150 tons of TNT, 2,366 tons of picric acid (which was even more unstable and powerful than TNT), and, finally, 246 tons of benzol that was packed in steel drums stacked four high. In all, the ship was loaded with six million pounds of high explosives that the French government purchased from its New York agents and which were being shipped to France to be used in “the Great War.”

Halifax was a beautiful port city, punctuated by Victorian homes on a gentle slope that rose from the harbor. It was populated by wealthy Canadians and generations of sailors who gave the place the aura of Boston—a place many people considered a sister city even though it was on the other side of the international border. The merchant sailors aboard the Mont-Blanc had survived a 5-day tension-filled trip up the Eastern seaboard and expected to spend a few days of rest and relaxation in Halifax before picking up a convoy for the harrowing trip across the Atlantic.

On December 6, the Mont-Blanc was under the command of Captain Aimé Joseph Marie Le Médec, on what would be his first trans-Atlantic crossing. His ship was heavily loaded, riding low in the water and steaming into a narrow, 1,000-foot wide channel known as “the Narrows” that would take it into the shelter of the inner harbor. The international code of Collision Regulations was simple: stay to the right side of the channel. There was no radar or radio in those days, so communication was carried on by the blasts of steam whistles and flags. If a ship wanted to let others know it planned to stick to the right side of the channel, it issued one blast. On the other hand, if a captain decided to make an exception to the rules, that is, to take the port side of the channel, his ship was required to give two short blasts. In either event, the other ship was required to respond with the same number of blasts which indicated that the signal was received and understood.

Halifax harbor was a busy place, with ships and tugs with barges in tow making their way in and out of the inner harbor though the Narrows. That morning, the Norwegian ship Imo was outbound from Halifax. She was empty and riding high in the water, bound for New York where she was scheduled to pick up relief supplies. Her captain, Hakkon From, had sailed in and out of Halifax at least twice without incident but this time because his ship had to make her way around a number of ships that were anchored in the basin, he chose to take the left side of the channel. Witnesses later described the Imo as travelling unusually fast, perhaps because of her lack of a cargo.

Although Captain From was on the left or “wrong” side of the channel, he intended to stay there. Accordingly, he issued two blasts of the Imo’s whistle. The incoming Mont-Blanc, responded with one blast, saying, in effect, “I’m on the right side of the channel, and you should be over on the other side.” The Imo responded with two short blasts, again insisting on its chosen course. When it was much too late, both ships attempted to take evasive maneuvers which only made the situation worse. It was the classic Three Stooges routine of Moe and Larry trying to get through a doorway at the same time, but it was no laughing matter.

The ships collided at 8:46 a.m. on a Thursday morning. The precariously stacked barrels of benzol on Mont-Blanc fell to the deck and immediately caught fire. Knowing what was to come, her captain and crew abandoned her in a lifeboat and grimly pulled for the opposite shore. Neither Captain From aboard the Imo nor the townspeople of Halifax had any clue of what might happen, and many ran to their windows to see the smoke rising and watch the unmanned burning ship drift and eventually ground herself at Pier 6 of the harbor. Hundreds of innocent people gathered watched the show from the city’s brand-new pedestrian bridge.

At 9:04 a.m., while unsuspecting firefighters from the shore and crews from other ships fought the blaze, the Mont-Blanc’s cargo ignited, and in one-fifteenth (1/15) of a second, the citizens of Halifax were subjected to the then-largest man-made explosion that ever occurred, to be outdone only by Hiroshima almost three decades later. The ship disintegrated in the first mushroom cloud ever witnessed and the people trying to fight the fire were vaporized; their remains were never found. The explosion drove the water out of the harbor. When it rushed back in, the resulting 35-foot high tsunami added to the devastation. Two square miles of the city were gone, crushed by the shock wave and then swept away. In all, 1,953 people were killed, some 9,000 were wounded and 25,000 were left homeless. Many of the injuries were to the eyes and faces of children and adults who were looking out of the windows of their homes when the Mont-Blanc blew up.

It is an interesting footnote to the tragedy of Halifax: the very first city to come to its aid was the city of Boston, which immediately sent trainloads of supplies and medical personnel. Still today, the cities of Nova Scotia compete for the honor of selecting a Christmas tree for Boston. After an appropriate tree-cutting ceremony, the tree is loaded onto a flatbed truck and sent to Halifax where, following a farewell parade, it is covered with provincial flags on both sides, and sent off to Boston. The tradition began in 1918, and although it costs the citizens of Halifax some $180,000 per year, they have no intention of ending it. As they put it, they “see no reason to stop saying ‘Thank you.’”

Who was at fault for the collision that devastated Halifax? On March 22, 1920, two and one-half years after the tragedy, Britain’s Privy Council said both captains were equally to blame. They held that the “Collision Rule” requires each ship, when faced with the possibility of a collision, has only two choices: stop or reverse. In other words, debating the issue of who has the right of way by giving conflicting signals is not permitted: both vessels must stop.

Let that be a lesson for each of us: when the members of a club, or the partners in a business, or the spouses in a marriage hear their voices rising, maybe it’s a good time to remember the fate of the Mont-Blanc and Imo: steam whistles, even very loud ones, don’t settle anything. When it happens, we need to apply our own version of the Collision Rule: both sides must stop, reverse, and sort things out quietly. Failure to do so can lead to unintended and devastating consequences.

(For more information on the subject, read the book, The Great Halifax Explosion written by John U. Bacon and published by William Morrow, an imprint of Harper-Collins, in 2017)

« A Dramatic Lesson in Leadership – Part 2
Folding the Flag »