What is a club?

As far back as the first paperback edition of Yachting Customs and Courtesies (20 years ago!) we’ve repeated the same mantra: “A club is first and foremost a group of people. Compatibility comes first; the name is secondary.” The lesson could not have been plainer than it was earlier this month when the Palm Beach Sailing Club provided the venue for the Jack Swenson Memorial race which was hosted by the Royal Turkey Yacht Club. The regatta was part of the international laser masters series and attracted 68 competitors from 8 countries.

A few people (fewer every year, thank goodness) become red in the face and argue that a “sailing” club cannot, by its very nature, be a “yacht” club, ignoring some very fine old institutions like the Buffalo Canoe Club whose clubhouse is not located in Buffalo, and whose only canoes are two on display in a rather elegant boathouse.

More to the point for today is the fascinating story of the Royal Turkeys which began in 1976 the waterfront home (backyard actually) of Dr. Jack Swenson of North Palm Beach, Florida. To say Doctor Jack was a sailing enthusiast is something of an understatement. He loved sailing; he especially loved sailing a particular kind of boat known as a “Laser” which is about 13 feet long and draws about 2 feet of water. It is light enough to be carried on a car top rack. The Laser is fast. And it’s wet. And it’s fun.

Naturally, “fun” is more fun when you share it with friends, especially when you’re a sailor and your idea of “fun” is competitive racing. Dr. Swenson began inviting his friends to his home in a somewhat exclusive part of the village, and–what the heck–since it was silly to cartop their boats back and forth, why not leave them right there in his backyard? They couldn’t leave a bunch of valuable boats laying around on the ground, of course, so they built a rack (it could hold more boats) and took over a large part of Doctor Jack’s garage to store sails and life preservers and the inevitable “parts” that accompany all boats. 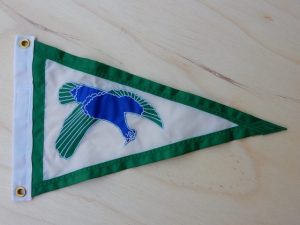 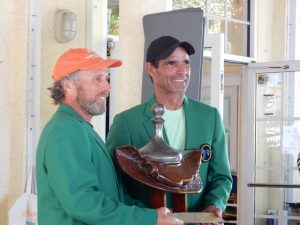 In time this group of compatible sailors formed their own club and named it after the beverage they shared following their races. And then, of course, they had to have a special burgee, and a trophy (a beautiful pewter decanter provided by Dr. Swenson, of course) and a way of special ceremony recognizing the winner. (“Why not a green jacket? If it’s good enough for the golfers, it’s good enough for us!”) And so, the Royal Turkey Yacht Club was born. (By the way you can hear this story told first hand by one of the participants by going to the Facebook page of Academy of Yachting).

And so we come to the great philosophical debate: is the Royal Turkey Yacht Club a legitimate “yacht club”? Let’s see: the basic definition of a “yacht” is a pleasure boat. Check. And a “club” is a group of people of compatible people with a common interest. Check. Established? The Turkeys have been around for some 43 years, so, okay, Check! A building? Linen tablecloths? A bar? Wait staff in nautical attire? Who added those things to the definition of a club? And, before you claim this is a silly argument, remember that the Royal Cork Yacht Club–the oldest continuously-operating yacht club in the world–was founded in 1720 and didn’t get a permanent home until 1854, when it was 134 years old. One could easily argue the Royal Turkeys have another 90 years to go.

The wide world of clubs needs to take a lesson from Juliet when she tells her Romeo that she didn’t give a darn whether she was going to be called a Montague or a Capulet. She was in love with him. People who are in love with pleasure boating need to hear those words.