A Cascading Failure of Reason

In Harbor of Refuge, the book that started it all, Attorney Jack Townsend reminds Rob Meacham a lesson he had picked up during his time in an exclusive prep school while translating Caesar’s Commentaries on the War with the Gauls: ‘Men easily believe that which they wish to believe.’  “Knowing that Gaul was divided into three parts has never done a damn thing for me,” Jack explained to his young protégé, “But that other thing, the one about ‘easily believing that which they wish to believe,’ that’s come in handy a whole bunch of times.”

Caesar wrote his Commentaries in something like 50 BCE, but the human race didn’t change much in the following centuries.  In 1820, a British officer by the name of Gregor MacGregor, visited the court of King George Frederic Augustus of the Mosquito Coast in Honduras.  The people who occupied the area were descendants of shipwrecked African slaves and the indigenous Hondurans, and, because they shared the historic Anglo hatred of Spain, the British authorities in the area had crowned their chieftans as “kings” since the 1600’s. 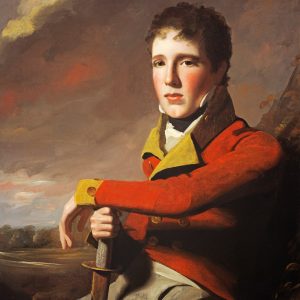 MacGregor was born to a noble but penniless Scottish family, and, considering that his options in life were limited, he joined the British army where his noble birth entitled him to an officer’s commission.  He spent most of his career in areas south of the equator, and when he returned to England, he announced that he was now Gregor I, the Cazique or “prince” of the Caribbean nation of Poyais.  He published a 355-page leather-bound guidebook, Sketch of the Mosquito Shore, Including the Territory of Poyais, which included maps of a country that was somewhat larger than Wales, and which, the Cazique claimed, was blessed with abundant fresh water and land that was ready for the plow.  He said the forests were full of exotic animals that had not developed a fear of man and could easily be taken.  He reported the natives were gentle, friendly folk who longed for Christianity. And he began issuing Poyais dollars and selling bonds as well as certificates of land claims. 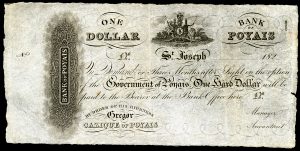 MacGregor lived in an era of exploration and conquest.  America and Australia were found to be real places after all, and many would-be colonists who felt they had missed their chances for fame and fortune in those places would not let another opportunity slip by.  In a short time, he convinced shiploads of anxious men and women to sell everything they owned and accompany him on his return to paradise.

The Honduras Packet was the first to sail, under the command of Hector Hall, an former British army officer whom the Cazique commissioned with the rank of lieutenant-colonel.  A short time later, a second immigrant ship, the Kennersley Castle, left England while five other ships were still preparing to sail.

The would-be citizens of Poyais landed on the coast of Honduras; and found it was far from the idyllic land promised by Prince Gregor.  With nowhere to turn and nothing to return to, the colonists constructed shelters of sticks and mud, and searched for fresh water, as they were certain the native Poyaisians would find them.  Their faith held out even as they began to die from starvation and tropical diseases like malaria and yellow fever. 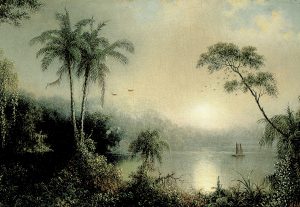 In May, 1823, Marshal Bennet, the Chief Magistrate of the Mosquito King’s Court, discovered the settlers and informed them that Poyais did not exist, but they refused to leave until another ship bearing George Frederick Augustus himself, the actual king of the Miskito Sambu, arrived and informed them that his title and office were hereditary.  He had never granted MacGregor the title of Cazique, nor had he authorized him to sell land or raise loans.  In fact, the emigrants were illegally on the land of Augustus.

The small group of survivors who remained were eventually rescued by a British ship and returned to England where Gregor MacGregor was exposed for what he was–a charlatan.  He had not merely “oversold” his nation; he made it up from whole cloth.  Even then, his supporters believed in him, and said their problems were the fault of the officers who led the colony in MacGregor’s absence.  Although MacGregor was arrested and held for a week, he was released without charges, and he immediately began a new, smaller, Poyais scheme.

In her book The Truth About Lies, psychologist Aja Raden says the Poyais colonists were the victims of a “sort of cascading failure of basic reason,” the first of which is “honesty bias”: a mental shortcut our brains take that accepts information as true if there are no obvious contradictions.  If you ask a total stranger for the time, and she looks at her wrist and says, “Two o’clock,” you’re likely to accept that information as true if the sun is where it should be at around midday.  The other shortcut is called the “authority bias.”  It is the habit that makes us tend to trust those who have more apparent authority than we do.  If you’re feeling sick, you’re more likely to accept the diagnosis of your family doctor than your trusty auto mechanic.  Clearly, we tend to believe those whom we consider to be more knowledgeable than ourselves.  But what about asking that same physician for advice when it comes to plunking down your hard-earned dollars for a new car?  Does the white coat and stethoscope-around-the-neck give him or her any special authority on that subject?

The world is full of people with letters like Ph.D. and J.D. after their names, and they often express opinions on the subjects they studied.  But if you want to know how to bake bread, you’d be better off going to the fellow covered with flour dust at the town bakery—you know, the guy who’s been doing it for 20 years.

« The Son of Two Cultures who Changed The World