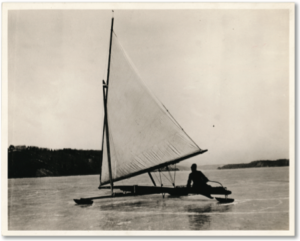 This 1905 photograph hangs in the Hudson River Ice Yacht Club. It shows one of the most remarkable men of the 20thcentury at the helm. It would be meaningless if he had not identified himself by the inscription on the back which reads, in part, “I enclose two copies of prints enlarged from a Kodak, showing me at the helm of the ice yacht HAWK. I suggest that you have this framed and hung on the wall over the spars. . . .”

We’ll get to the “driver” in a minute, but first, for those of us who live in warmer climes, and believe that “ice” is something that is found only in refreshing drinks, a few words about the peculiar world of iceboating:

What is an Iceboat?

An iceboat consists of a long, slim hull attached to a perpendicular cross- piece called a “runner plank.” The boat is supported by three runners: think of them as big ice skates. One is attached to each end of the runner plank, and a third is located either at the forward end or stern of the hull. 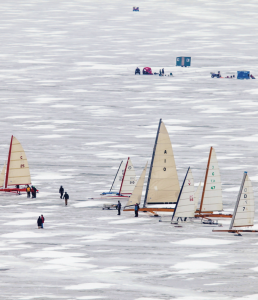 Ice boat yacht clubs are like traditional yacht clubs with elected flag officers and competitions for trophies such as the “Ice Yacht Challenge Pennant” which was established in 1881 and is the iceboat version of the America’s Cup. They also have their own unique class associations, the largest of which is the International DN Ice Yacht Racing Association, named in honor of the Detroit News which sponsored an iceboat design competition during the winter of 1936-1937. When properly piloted over what are called “good ice conditions,” in a steady 10 to 12 mile per hour wind, a DN class boat can achieve speeds in excess of 50 miles per hour. It is considered a good beginner’s boat, unlike the Skeeter class boats which have been clocked at twice that speed.  Ice boat sailing has been described as “a combination of race car driving and sailing,” and the sport attracts sailors who can only be described as “a different breed of cat.”

So who’s the famous person at the helm?

The fellow at the helm of the ice boat in the 1905 photograph could easily be called a different breed of cat.  A New York patrician from a wealthy family, he could have wasted his life on any frivolous entertainment that captured his fancy. He didn’t.  Instead, at a young age, he entered the rough and tumble world of politics with the desire to make things better for the common man.  His career might have been cut short at age 39 when he was stuck by an incurable disease that left him partially paralyzed.  He could have stayed home covered with a shawl sitting in a rocking chair on the porch of the family’s home in Hyde Park, and his well-meaning, over-protective mother urged him to do just that.  Fortunately for his country and the world, he didn’t.

He spent the next several years rehabilitating himself, endlessly working hard on a personal regimen of physical therapy that included swimming three times a week, and practicing his own form of walking in which he used a cane and the arm of his son or a friend for balance. With supreme effort and upper body strength he found he could maneuver his hips and swing his legs forward in a swaying motion to make it appear as if he were walking.

During his rehabilitation process, he made a trip to a resort in Georgia, hoping that the mineral water in the warm springs would restore his strength.  Although they did not, he kept at it, and when the resort was threatened with foreclosure he bought it and made it into a rehabilitation center for patients like himself.

With renewed confidence he re-entered the world of New York politics, was elected Governor and, a few years later, President of the United States where he served during one of the most difficult times in our nation’s history.  Through it all, he continued to visit Warm Springs and enjoyed swimming with his friends–the children who were his fellow patients.

He became a symbol of strength and perseverance to his countrymen. His wife later wrote of the ordeal, “You gain strength, courage and confidence by every experience in which you really stop to look fear in the face. You are able to say to yourself, ‘I have lived through this horror. I can take the next thing that comes along.’…You must do the thing you think you cannot do.”

By now you may have guessed the 23-year old “driver” of that ice boat was none other than our 32ndpresident, Franklin Delano Roosevelt.  The rest of what he wrote on the back of that old photograph identifies both him and the date.  It reads,  “It can be labeled ‘FDR at helm of ice yacht HAWK off Roosevelt Point, 1905.’”

Franklin Delano Roosevelt was a man who never gave up.

(F.D.R.’s wheelchair and braces are on display at his Little White House in Warm Springs, GA.) 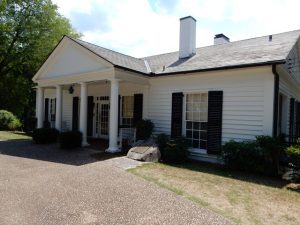 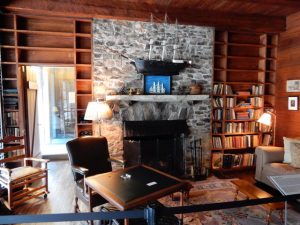 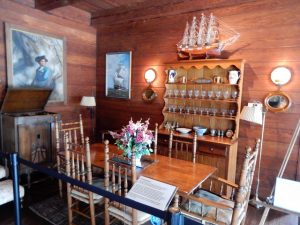 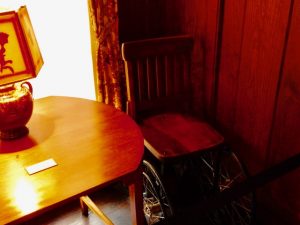 FDR’s wheelchair was never far away.. 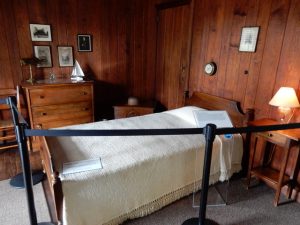 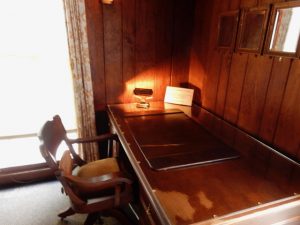 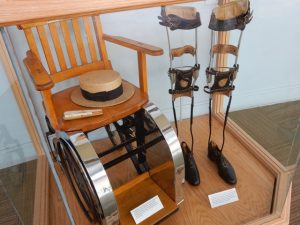 FDR’s wheelchair and braces are on display. 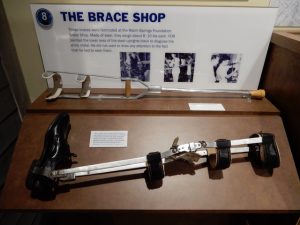 His braces show the severity of his handicap–but he never gave up!

« “Salvage” does not mean “Finders Keepers”
All Hail the Entrance of the Boar’s Head! »