All Hail the Entrance of the Boar’s Head! 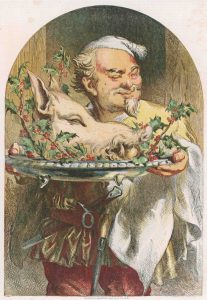 The tradition of the Boar’s Head Festival goes back to Medieval England, where, it is said, on a cold Christmas Eve in the 14th century (or, perhaps, the 16th century—nobody is entirely sure), a university student was walking through the woods, lost in thought as he studied his copy of Aristotle. In the fading twilight a wild boar attacked the scholar, and the quick-thinking lad saved himself by ramming his book down the animal’s throat. The next day’s feast at Oxford featured a tasty treat: roast pork. It was the custom of the time to present the head of the animal to the hunter, but, in honor of the day, the Boar’s Head was brought into the dining hall and set before an effigy of the Christ Child, in thanksgiving for the young man’s life.

Over the years, the Boar’s Head ceremony was seen to represent God’s power to slay evil, and the tradition gradually melded with the tradition of Bringing in the Yule Log which took place around the same time of the year. Eventually, the celebrations combined and were held on the Feast of the Epiphany–the twelfth day of Christmas and end of the holiday season.

By the 19th century, the Boar’s Head and Yule Log Ceremony was no longer limited to the presentation of the head of a pig followed by a simple log: it was a festival during which every Christmas tradition and legend was acted out. Players dressed as the Three Kings came, bearing their gifts with young attendants in tow while a choir performed their song. Good King Wenceslaus appeared, singing his song of a cold Christmas morning. Jugglers, Mimes, Cooks, Shepherds, the Royal Baker, complete with 24 blackbirds in a giant pie, and, of course, actual Royalty–all were a part of a pageant that served as an unforgettable end to the time of Holiday merriment before the people had to return to their workaday lives.

The Boar’s Head Festival is performed in many places throughout the United States, but one of the most extravagant is at the Church of Bethesda-by-the-Sea in Palm Beach, Florida, where the people of that island don costumes that have been handed down for several generations and for a weekend become the denizens of Medieval England in an elaborate and unique celebration. They are joined by many members of the audience who don appropriate garb such as kilts and scholars’ robes. If you’re within driving distance, it’s well worth the effort to participate in this event–even if it’s only as a spectator. 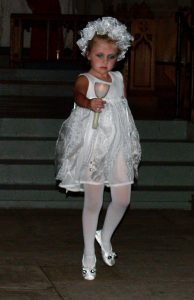 A lone Sprite enters the darkened church with a single candle to announce the Light of the World. 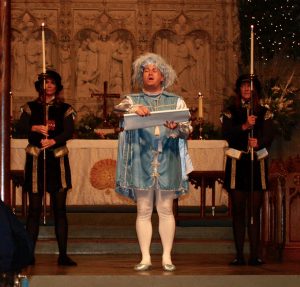 The Royal Chamberlain announces the opening of the Festival in a song. 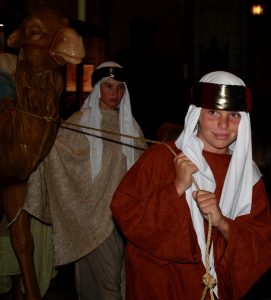 Shepherds arrive with a camel. 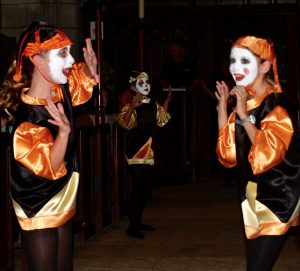 Costumed Mimes participate in the pageant. 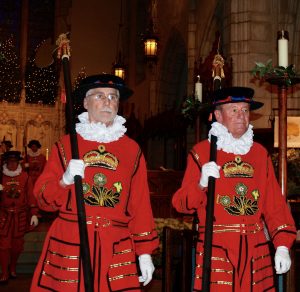 The Yeomen of the Guard–called “The Beefeaters–are the guardians of the Queen. 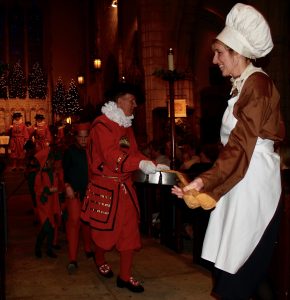 The Royal Baker assisted by a “Beefeater” shows off her Four and Twenty Blackbirds baked in a pie. 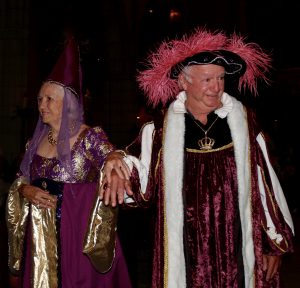 Residents of Palm Beach who play Royalty take great pride in making their own costumes. 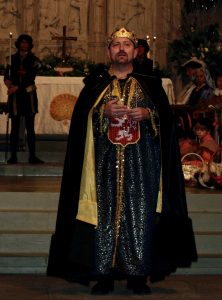 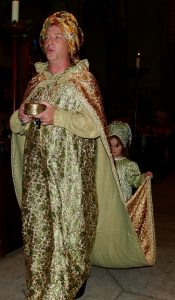 The first of the Wise Men, Balthasar, brings gold while he sings of the Three Kings. 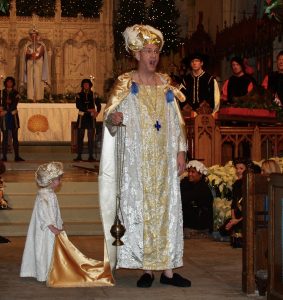 Melchior, the second of the Three Wise Men brings a gift of frankencense. 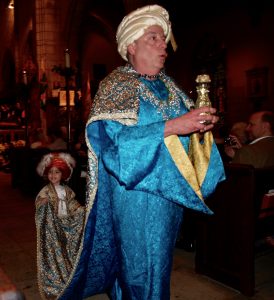 The third Wise Man, Gaspar, brings myrrh in a flask. 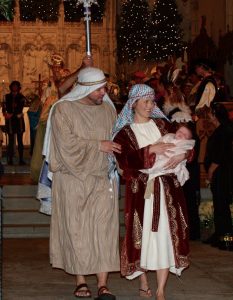 At last, the King of All Kings arrives in the arms of his mother.