Niagara Falls! Whether you know it as the Honeymoon Capital or a punch line to a running gag from an Abbott and Costello skit, you can be sure of one thing: the Falls at Niagara isn’t a place–it’s a work in progress.

First consider the facts: the Niagara River is approximately 36 miles long, and it flows northward from Lake Erie to Lake Ontario, which is the lowest of the five Great Lakes and is the only one that is connected to the Atlantic Ocean. The Niagara is the only natural outlet for the upper lakes. Every drop of water, every molecule, in Lake Superior and its sisters must make its way “down” to Lake Erie, and then north, to Lake Ontario. The upper lakes are around 550 feet above sea level, and the water has to drop around 300 feet to get to Lake Ontario and from there work its way out to sea level through the St. Lawrence River. Okay, so what? Everybody knows that water flows downhill. Let’er rip, right? Except for one thing–something called the Niagara Escarpment.

Much of northeastern North America is located on a bed of very hard rock called dolomite. This isn’t a local phenomenon; it’s a huge area covering thousands of square miles. In the area of Eastern Ontario and Western New York it’s called the “Niagara Escarpment,” and it’s the reason why the Niagara River can’t flow peacefully downstream, and, incidentally, why nineteenth century engineers had to construct a series of five locks in the City of Lockport, NY, to raise barges on the Erie Canal “up” to the level of Lake Erie. 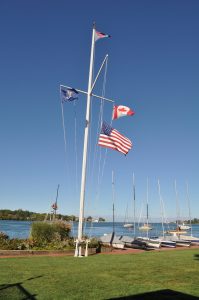 About 18,000 years ago huge ice sheets covered much of North America and as they advanced southward they carved out the basins of that we call the Great Lakes. Then, after about 6,000 years, those glaciers began to melt and retreat, and they filled those basins with what is today the largest fresh water system on our planet. The Niagara River meets Lake Ontario where the beautiful Youngstown Yacht Club is now located.

As it eroded upstream, the river had a relatively easy time of it as the land rose gently on either side. Then, when it was about 6 miles downstream from its present location (near today’s Lewiston, NY) it ran into the harder rock of the Escarpment, and “the Falls” began to grow. Inexorably, the current continued to wear away at the rock, and water cut its way upstream leaving a gorge covered by boulders, trees, and undergrowth, with the “Lower Niagara” rushing nearby in a scene that even today is one of prehistoric beauty. 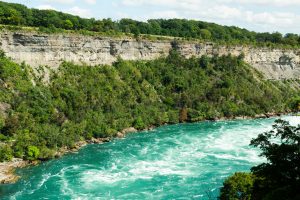 Lower Niagara River in the Niagara Gorge, Border Between Canada and United States.

We don’t know who “discovered” Niagara Falls, of course. Scientists speculate that the that human beings who arrived in the area about 12,000 years ago would have been the first people to see the early falls. In the early seventeenth century French explorers reported hearing descriptions of the falls from native people, but it wasn’t until 1678, that a Catholic priest, Father Louis Hennepin, actually visited Niagara Falls. Nineteen years later, he published an engraving of it in his book, Nouvelle Decouverte. 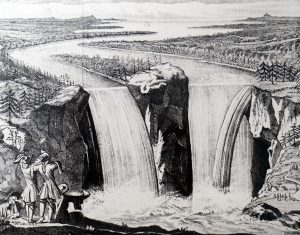 Whether you consider “falls” to be plural or singular, the description of Hennepin’s wonder is correct. About 800 years ago, the Upper Niagara hit an obstruction we know as “Goat Island” as it rushed downstream. By the time the good Father arrived, the waterway had split around that island, and flowed over a rather straight cliff on one side and horseshoe shaped embankment on the other. Modern political boundaries put the straight portion in the United States, and most of the curved portion in Canada, and we call them the “American Falls” and the “Canadian (or Horseshoe) Falls” for that reason. 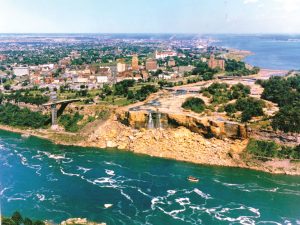 But modern political boundaries and “relatively” recent French engravings aren’t the most interesting thing about the Falls. The hard rock that caused the problem in the first place, tilts downward toward the south or upriver direction. As they stand today, the Falls continue to erode, receding upriver at anywhere from one to three feet per year, and, because of that tilt, the Canadian Falls loses height with every foot of recession. Geologists estimate that in about 2,000 years, it will reach the upstream end of the obstruction we call Goat Island, and the channel to the American Falls will be cut off, leaving the existing talus and extending the dry “Upper Gorge” farther upstream.

Those same Geologists predict that for another 15,000 years or so the remaining Falls will continue to erode upstream about 4 miles to somewhere around today’s Navy Island. At that point, the erosion-resistant bedrock will run out, and the river will erode faster; it will cut through the remaining softer rock for 20 or-so miles to Lake Erie in give-or-take 50,000 years. And, of course “the Falls” will disappear long before then, having been replaced by a swift-flowing Niagara River.

And then? It seems that even the best scientists have difficulty predicting what will happen in 50,000 years. At the moment, most of them agree that human beings have existed in North America for 10,000 to 20,000 years. Where they came from and how they got here are questions that are still being debated.

There is more agreement about the great ice sheets. It is pretty well settled that they receded about 20,000 years ago and today we are in a warm “interglacial” period that began about 11,000 years ago. Some of those same scientists predict that we could enter another ice age in as little is 1,500 years, and that it could create an entirely different system of lakes and rivers!

But if that new ice age doesn’t happen and you really want to stretch your imagination, there’s this scenario: Lake Erie is not only the second-lowest of the Great Lakes. It is also the shallowest, with an average depth of 65 feet. There is a good argument that once the Niagara River reaches the Lake, most of the water will drain out of it, and there will be Four–not Five–Great Lakes, with a river running from somewhere near present-day Detroit, MI, to Youngstown, NY.

It’s just a matter of time!