A first-time visitor to the Washington Monument in our nation’s Capital may get something of a shock. There’s no doubt that the world’s tallest obelisk, standing at over 555 feet and gleaming in the sunlight is a fitting tribute to America’s first President. But anyone who is not blinded by sheer patriotism can easily see there is a major flaw: 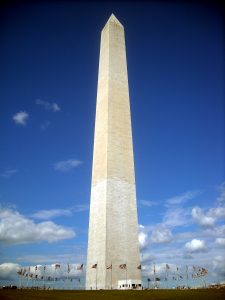 about one-third of the way up the monument, the color of the stone changes from a light cream/tan to a crisp white.

And try as you might to chalk up the error to a gigantic shadow, or the vagaries of outdoor illumination, the break between the bottom third and the top two thirds of the obelisk appears to be a straight line. It doesn’t just “appear” to be a straight line; it is a straight line. There’s a reason for that, and it commemorates a deed that involves a hero who is unnamed and whose sacrifice has been forgotten. We’ll get to that hero in a minute, but first let’s get the facts settled.

The monument was never meant to be a free-standing structure. Robert Mills, a South Carolina architect, originally designed a colonnaded circular building surrounding the obelisk. Mills envisioned his masterpiece with a statue of Washington standing in a chariot holding the reins of six horses atop the portico, and planned for the building to contain the statues of 30 prominent heroes of the Revolutionary War and 56 signers of the Declaration of Independence. But he quickly saw there was little hope of funding such a project, and he abandoned the building. Construction on the pure obelisk began in 1848, and that’s when our story begins.

The year was 1848, and, once the final design was settled, construction began using private funds raised by something called the Washington Monument Society–which quickly was racked by a struggle for control. In 1855 the Society ran out of money. Congress then donated $200,000 and encouraged individuals and organizations to donate commemorative stones. When the Vatican donated a stone, members of the ultra-conservative, anti-Catholic, “American Party” (the “Know-Nothing Party”), objected violently and destroyed it. The Party then took control of the Monument Society; political infighting reigned supreme; Congress rescinded its $200,000 contribution and private contributions ceased. The unfinished monument was capped with a wooden roof and Washingtonians referred to it as “the Stump” for the next 20 years. 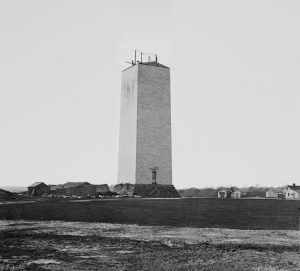 People renewed their interest in the Monument following the Civil War.
In 1876, the Monument Society was reorganized. Congress agreed to appropriate sufficient funds to complete the Washington Monument without private donations, and the work was resumed. Given the more than two-decade lapse in construction, a new source of material had to be found, and new stones were brought in from different quarries: marble from Maryland and granite from New England. The stones looked similar when the Monument was completed in 1885, but over the past century they have weathered differently. The result is the line that the visitor sees today.

And the hero? Oh, yes, the unsung hero of this piece. When engineers re-entered the unfinished obelisk in 1876 to resume work, they found that the ropes and scaffolding were rotted beyond use. Unless new cables could be affixed to the top of the structure, scaffolding would have to be re-built from the ground up, which would be a time-consuming and expensive proposition.  That’s when one of the engineers had a fateful idea: he captured a nearby pigeon, attached several hundred feet of very fine wire to it, then took it inside the open tower and fired a pistol. The frightened bird immediately took off and flew out of the open top, where another man shot it and recovered the wire. Then, using a technique known to every sailor by which ever-increasing sizes of rope are strung to a “messenger line,” a heavy cable was raised to the top of the truncated obelisk and work resumed.

Today, the tower is capped by a “pyramidion,”–a small, pyramid-shaped room with windows on four sides that overlook our nation’s capital. On one of the walls of the pyramidion is a plaque commemorating the “Chief Engineer and Architect,” Col. Thomas Lincoln Casey, and his assistants. Alas, there is no mention of the unnamed creature who made the monument possible: he or she is the unknown Washington pigeon. 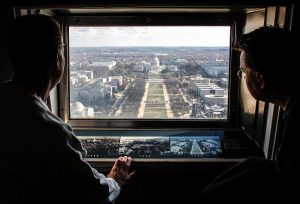 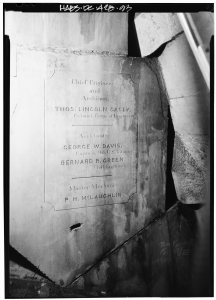 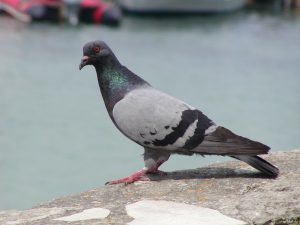