Regardless of their political party or philosophical persuasion, all Americans agree that the job of President of the United States is a killer. The decisions are constant and the stress is unrelenting. And, as President Ronald Regan observed, when you live upstairs from “the store,” there’s no such thing as sneaking out early. All of that is especially true in times of war, and, in 1943, the War was worldwide.

The President at the time was Franklin Delano Roosevelt, and, physically, he should have been the one least capable of handling it. A wealthy New York patrician, he had been stricken with polio myelitis when he was 39 years old; it left him partially paralyzed and unable to walk. As we wrote in The Log of October 31, 2019, “he could have stayed home covered with a shawl, sitting in a rocking chair on the porch of the family’s home in Hyde Park, and his well-meaning, over-protective mother urged him to do just that.” Fortunately for his country and the world, he didn’t. 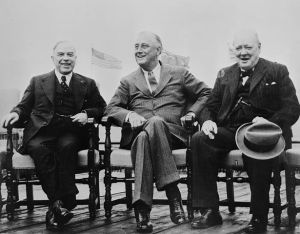 World War II began for us when we were attacked at Pearl Harbor in December, 1941. We weren’t ready for it, and for the next year we pretty much got beaten up by the Axis powers while we played catch-up. What Winston Churchill called “the end of the beginning” came 11 months later, in November, 1942. Six months after that, in mid-1943, he was scheduled to meet Roosevelt face-to-face in Quebec to plan the course of the war. Their agenda included the invasion of Italy from the Allied foothold in North Africa–known as Operation Overlord–as well as America’s progress on the atomic bomb. Prior to that meeting, the President’s closest friends, including his confidant Henry Hopkins, realized he was at the limit of his endurance. He was physically and mentally exhausted, and in no shape to make the kind of decisions the Quebec conference would require. The only solution was a presidential vacation, and whether he could make the time for it or not, they would arrange it for him. 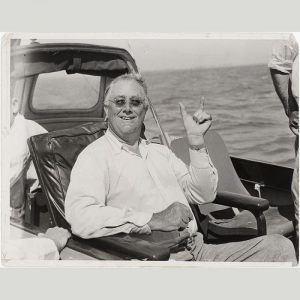 Roosevelt loved fishing. According to James Byrnes, the man informally known as the “assistant president for domestic affairs” and later Justice of the United States Supreme Court, FDR took fishing “so seriously that it was like working.” Knowing of his love for the sport, his friends organized a top-secret fishing expedition on Lake Huron to the wilds of Manitoulin Island, in Georgian Bay, Canada.

The U.S.S. Wilmette, a naval training ship in Chicago was assigned to organize the trip and supply the personnel who would accompany the presidential party. The Wilmette’s captain detailed Lt. John Manly to be Roosevelt’s right-hand-man during the trip, and asked him to find a yacht, something “classier than a ship’s boat” that would be suitable for the President of the United States. 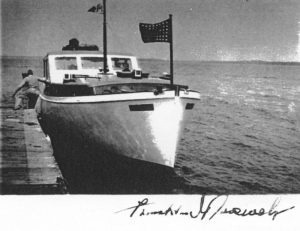 Lieutenant Manly had a pre-war fishing friend, Army Lieutenant Ernest Loeb, whose family owned an estate in Charlevoix, Michigan, and they happened to own a classy vessel: it was a 1941 Matthews Sedan named Anna H., after Lt. Loeb’s mother, Anna Henrietta Loeb. Manly must have thought the hand of Providence was at work because the President’s only daughter was named Anna, and, to their credit, the Loeb family allowed their yacht to be temporarily requisitioned by the Navy without any explanation of its intended use. 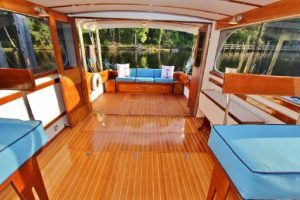 One of the best-kept secrets of the war years was the fact that FDR was confined to a wheelchair. The Matthews 38 Sedan is unique in that the entire back wall of the cabin opens to give complete access to the rear deck. With no narrow companionways to restrict his passage, it was perfectly suited for the President’s lack of mobility. Lt. Manley took command of the vessel and skippered it on the 150-or-so mile journey through the Straits of Mackinac from Charlevoix to the hamlet of Birch Island, Ontario, where a special railroad siding had been constructed to accommodate the Presidential train for the duration of the FDR’s stay. A second private yacht, the M.V.Mizpah, rendezvoused there to handle additional fishermen in the party. 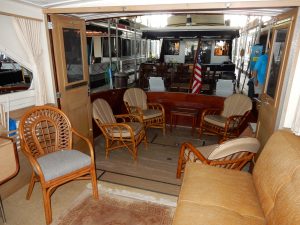 A few years ago, while visiting Robert “Buzz” Bisanz, President-Elect of the International Order of the Blue Gavel, at his summer home at the Allatoona Yacht Club, my wife and I had the privilege of boarding a fully restored similar Matthews Sedan owned by one of the club members.

Roosevelt, his dog Falla, and his party of friends that included some of the most influential men in America such as Henry L. Hopkins, Admiral William H. Leahy, and James F. Byrnes, arrived by a special train of 14 cars that included equipment and radio operators who kept them in instant communications with the White House. The private armored presidential car, Ferdinand Magellan, became their headquarters for evening cocktails, fish dinners, and “merry talk about the latest rumors and competitive talk about fishing exploits.”

Even in the Canadian wilderness, Roosevelt spent several hours each morning in the communications car, maintaining contact with the few people in the outside world who knew his location. When he determined his work was finished for the day, it was time to fish. According to Admiral Leahy’s personal journal, FDR’s established tradition required each participant to contribute $1.00 to a daily pool which provided prizes to the men who brought in the largest, longest and greatest number of fish. To his credit, Lt. Manly knew the Anna H. and the surrounding waters quite well, and he skippered the yacht to areas where Admiral Leahy recalled there were plenty of fish in the clear, deep water that in the still of late afternoon could reflect the rocks so perfectly as to leave boaters feeling suspended in place and time.

The six idyllic days gave young Lt. Manly a view of his Commander-in-Chief that was seldom seen by others. He later wrote of how FDR shared half his sandwich with the yacht’s bo’sun, and how he made sure the enlisted men got a proper amount of rest. Although the trip was kept secret, the locals knew who was visiting. A man named E.D. Wilkins later told the Sudbury Daily Star that while he was out fishing, he looked up from his pole to see the unmistakable smiling face of the United States President who hailed him from the Anna H and asked, “What kind of luck are you having?” When Wilkins held up a string of two bass, Roosevelt shouted. “We’re going after some like that right away.” 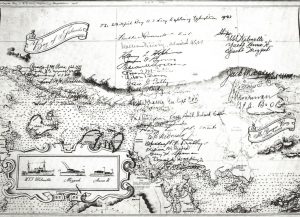 At the end of his six days of respite, all the participants joined President Roosevelt in signing a chart of the area which he titled “The Whitefish Bay U.S. Navy Exploring Expedition, 1943.” Back in Washington, he wrote to his daughter:

Dearest Anna:
I have just returned to Washington after a grand six days fishing in the northern waters of Ontario off Georgian Bay. We got a lot of black bass, several walleyed pike and pickerel. I am rested and browned and all ready for the next bout which you will read about by the time you get this . . .
Affectionately,
Dad

The “Whitefish Bay Exploring Expedition” was the last vacation of Franklin D. Roosevelt’s life. He died in office of a brain hemorrhage less than two years later, on April 12, 1945, never again having gotten away from “the store.” If there is any justice in the world, right now he’s teaching St. Peter how to catch fish with a rod and reel.

Editorial Disclosure: The author is the Past Commodore and Founder of the Great Lakes Chapter, Matthews Boat Owners Association, and owned two of the classic vessels when he was much younger and into things like sanding and painting hulls, and refinishing “brightwork.” In spite of the blood, sweat, tears and money he spent on those chores, he has never lost his love for Matthews boats, and maintains his membership in the M.B.O.A. to this day. Much of the information in this essay came from the M.B.O.A. Log, and the book, Advocating Overlord, the D-Day Strategy and the Atomic Bomb, by Philip Padgett.

« A forgotten, unsung hero.
Accepting the Responsibility of Leadership »