Among the many yachting adventures of the twentieth century is that of Albert Younglove Gowen and his wife, Jeanne Bouchet Gowen, who left New York on August 21, 1921, and motored their yacht, Speejacks, around the world. Here is their story:

A.Y.Gowen graduated from Harvard in 1907 and began his career in a stone quarry. After three years he went to work for Lehigh Cement Company, where he eventually became Vice President, and Commodore of the Cleveland Yacht Club. Along the way he amassed a considerable fortune including a large portfolio of stock in the Standard Oil Company. 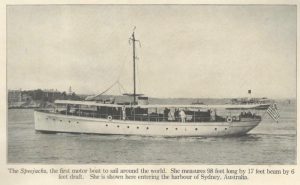 In 1919, Gowen’s doctor advised him that he had “worked himself to death” and had less than three years to live. “Your only hope is to take a year off from business and learn to relax,” the physician warned. It was all the temptation A.Y. needed to fulfill his lifelong dream of cruising around the world, and he ordered a specially-built boat from the Consolidated Shipbuilding Corporation of New York. The result was a 98-foot motor yacht christened with the nickname A.Y. had been given at Harvard: Speejacks.

A.Y. was not a sailor. His vessel of choice was powered by two 250 horsepower Winton gasoline engines, which consumed about 2 gallons a mile at cruising speed of 8 knots, although she had a top speed of 14 knots. Her fuel capacity was 5,000 gallons and he arranged for fuel dumps at strategic points around the world.