Accepting the Responsibility of Leadership

What could have been the most important message of World War II is one that was never sent. It was hand-written by Supreme Allied Commander Dwight D. Eisenhower late on June 5, 1944–the night before the D-Day invasion of Normandy–and he kept it in his pocket, he said, “in case it was needed.” Fortunately, it wasn’t. We’ll get to that story in a minute, but first let’s examine “Ike” Eisenhower, the man. 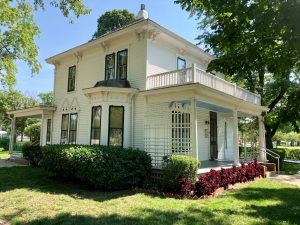 Dwight David Eisenhower was only two years old when his family moved to Abilene, Kansas, and for the rest of his life he considered it to be his home town. His nickname, “Ike” was a takeoff on his last name, and, with his older brother, they were known as “Big Ike” and “Little Ike.” As a young boy, he was fascinated with military history, and became an insatiable reader on subject, much to the displeasure of his mother who was an avowed Mennonite and later a Jehovah’s Witness. As a regular part of their daily routine, the Eisenhower children participated in family Bible study at breakfast and dinner times. 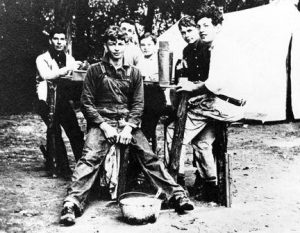 “Little Ike” front and center, camping with friends in Abilene.

Ike applied to both the United States Military Academy and the United Naval Academy because he was unable to afford a college education. After he passed the entrance examinations, the Navy rejected him because of his age and he headed off to West Point where he graduated in 1915. He requested an overseas combat assignment in World War I, but instead, he was promoted to captain and posted to training duty, including training the newly-formed tank corps, at several stateside camps where he showed excellent skills as an organizer and leader of men. Those skills would serve him well in later years.

Promotions were few and far between following the “Great War,” and although he was promoted to major shortly after the armistice, he remained at that rank for the next 16 years, serving on the staffs of men with personalities as diverse as those of George C. Marshall and Douglas MacArthur. 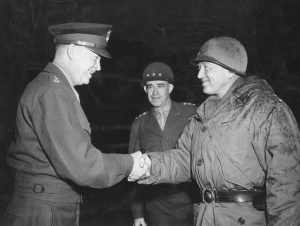 General Eisenhower with Omar Bradley (center) and George Patton (right). Ike was well known for his ability to work with anybody.

Some people said that during those years Ike developed his famous ability to deal with people like Winston Churchill, George Patton and Bernard Montgomery. Whether they did or did not, we can be sure of one thing: those years gave him the opportunity to study the leadership skills (or lack of skills) of America’s top brass. The lessons served him well when he became the leader of all combined Allied forces in Europe.

Students of leadership have defined eleven characteristics that are essential. Good leaders have some of them; great leaders have all of them:

Self Confidence: The leader must be self-confident without being a know-it-all. He or she is able to objectively assess his or her own ability and communicate that ability to the group.

Integrity: People with integrity of character regularly make their word their bond. Their loyalty to the goal is beyond question and in striving for it they consistently put the common good ahead of their own self-interest.

Responsibility: Responsible people can be depended upon to carry out any task expected of them, no matter how small or casually accepted. The responsible leader recognizes the principle of “the buck stops here.”

Competence: Good leaders need to be competent, and such competence must extend to more than simply knowing how to run a meeting. 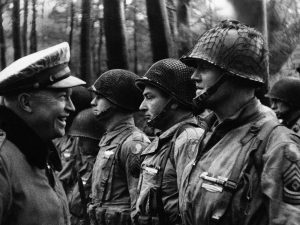 Eisenhower’s enthusiasm for the cause was always on display even in inclement weather.

Enthusiasm: A good leader is enthusiastic about the organization and activities. He or she must have, what Field Marshal Sir Bernard Law Montgomery called, “infectious optimism.”

Audacity: Along with enthusiasm goes a certain amount of audacity. A leader should have enough faith in his or her ability and the loyalty of the followers to go out on a limb when necessary.

Tenacity: Just as important as audacity is tenacity; once the leader makes the audacious decision, he or she must be tenacious to see it through to success. 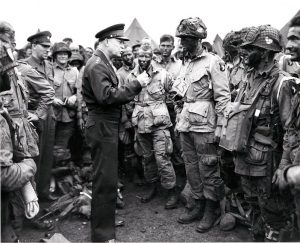 Ike’s well-known empathy for his troops led him to visit every division that would be involved in the D-Day invasion.

Empathy: Empathy is not sympathy; it is the ability to understand the inner feelings of another person. The wise leader understands where others are coming from and must be able to identify with them on some level.

Tact: Of all the attributes of leadership, tact may be the most difficult to develop, not because leaders are not tactful, but because they would rather avoid situations where tact is required. Tact is the ability to deal with problems without giving offense.

Courtesy: The best leaders are always courteous, both as a matter of principle and as a way of setting an example for their followers. 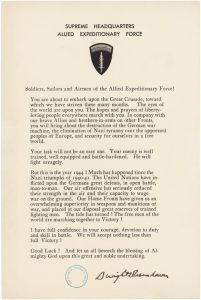 General Eisenhower knew full well the cost in human life and suffering that would result from D-Day, and because of the empathy felt with his men, he personally visited every division where he would mingle, shoulder to shoulder, with those who would be involved in the invasion. Just before the day arrived, he issued a letter in which he pulled no punches. After admitting their task would not be an easy one, he told them he had “full confidence” in their “courage, devotion to duty, and skill in battle.” “The tide has turned!” he reminded them. “The free men of the world are marching together to Victory!

But Ike also wrote another letter. It was never published and today it is on display at his Presidential Library. It reads:

“Our landings in the Cherbourg-Havre have failed to gain a satisfactory foothold and the [troops have been withdrawn.] I have withdrawn the troops. [This particular operation] My decision to attack at this time and place was based on the best information possible. The troops, the air and Navy did all that [I asked] bravery and devotion to duty could do. If any blame or fault attaches to the attempt, it is mine alone.”

After he wrote the message, Ike struck out some words and added others. The words in brackets are the ones he struck out and they are as important as the additions. Instead of the passive voice, “the troops have been withdrawn” he took personal responsibility: “I have withdrawn the troops.” A few words later, he took out the generalization, “This particular operation,” in favor of “My decision to attack. . .” Finally, he made it clear that his men had done “all that . . . bravery and devotion to duty could do.” But his final sentence is the most dramatic, and it should be engraved on the bathroom mirror of everyone who aspires to a position of leadership in any walk of life:

“If any blame or fault attaches to the attempt, it is mine alone.”

Those are words of a great leader.