People who have been in dicey situations especially when they are out of sight of land know that prayer never hurts, so it’s not surprising that a number of saints are connected with seafaring and seafarers. Here’s one of the most obscure. 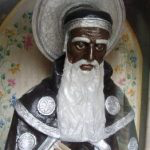 According to tradition, St. Calogero was a “black” saint, who came to Sicily to evangelize it and to spread the Christian faith. He took care of the sick by treating them with the sulphur waters that he found in the lava caves, where he lived in hermitage. His feast day is celebrated with an 8-day festival that takes place in Agrigento, a town near Augusta, where my Dad spend his early years.

Saint Calogero (pronounced Ka-loge-eh-ro) is a protector of the seaside town of Sciacca in the region of Agrigento, on the southern shore of Sicily. The Tringali family hails from the nearby town of Augusta, on east coast. The area has been engaged in trade and fishing since at least the time of the Greeks who conquered the area and colonized it beginning in 800 BCE. Some beautiful Grecian temples still stand in Agrigento, even though the original builders and believers are long gone. But Saint Calogero is still there. Just ask any sailor who had the misfortune of being becalmed on a hot Sicilian day when the sun was beating directly down on him and he was miles from his home. Even today there are few “iron sails” or “stinkpots” on these vessels. A generation or two ago there were none. If the wind stopped or it blew too hard, you could either sit with your head between your legs, or you could climb up into the rigging and shout – as loud as you could – “Viva San Calogero!”“Viva San Calogero,” and the breeze would freshen up if it had died; or it would calm down if it had blown up into a storm.Does it work? I have the testimony of only one eyewitness: my father, who right about now likely is playing Bocce with Saint Calogero up there somewhere. 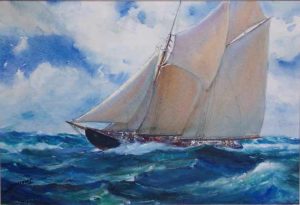 Dad’s father owned a two-masted, gaff-rigged fishing schooner of about sixty feet. My father was 12, and his older brother was 14; they, along with one hired man were the crew. The new guy must have been a stranger, because Grandpa was known throughout Sicily for his . . . ahem . . . “parsimony,” when it came to provisioning the boat. Anyway, the hired guy jumped ship in Africa. And Grandpa, not willing to spend more money said, “To hell with him. The three of us are men. We can handle our boat. We’ll sail her back ourselves.”

The weather held for the first two days, but on the third night things got nasty. The winds came up pushing a driving rain. When they tried to lower the mainsail, they found the mainsheet (Ed: the rope holding the sail) was stuck in the block up at the peak of the mast. Dad’s father said, “Yano, (Ed: that’s short for Sebastiano), you’re the smallest. Climb up the mast and jump on the gaff to break it loose.” (Ed: The gaff is the wooden spar holding the top part of the sail.) Dad told me, “I took one look at that mast, which seemed to touch the water when the boat rocked from side to side. It was the only time I disobeyed my father. I said, ‘No, papa, you do it.’” Well Grandpa couldn’t, and 14-year old Frank wasn’t about to try, so the two boys did something they heard about from their mother. They held on to the rigging at the stern and shouted as loudly as they could, “Viva San Calogero! Viva San Calogero.” And, Dad said, sure enough, after a few minutes the winds began to calm down. They made it home without further incident.

Does calling on the Sicilian Saint Calogero help if you need more or less wind? I don’t know. But I know it couldn’t hurt to give him a holler.