Advice for Leaders at the Year’s End: Exit Gracefully

Another year comes to a close. The nominating committee having reported, and the members having voted (Please, God, in response to a motion from the floor for the Secretary to “cast one ballot for each of the nominees”), the new officers will be installed. Now comes that fateful day when those who have led in the past will themselves be led in the new year. To those happy or perhaps, unhappy souls, we boldly give this modicum of advice:

One of the most important things for any leader to know is when to gracefully leave the spotlight and trust in the leadership of those who follow through the chairs. 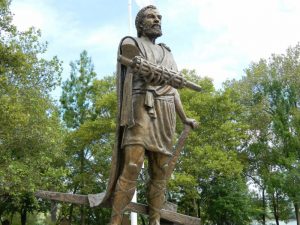 The leader Lucius Quinctius Cincinnatus (519 BCE) set an example for everyone who accepts a leadership role.  The Roman Senate begged Cincinnatus to become temporary dictator of Rome and lead the army against the invading Germanic tribes.  He accepted the position, and as a symbol of his absolute authority the Senate gave him a faces, a bundle of reeds wrapped around a battle axe. He defeated Rome’s enemies, and then resigned his office, gave up his power, and returned to his farm.  His name endures to this day as an example of virtue, service and good leadership.

George Washington was a great admirer of Cincinnatus, and after serving two terms as President of the United States, he voluntarily left office to return to his beloved Mount Vernon.  With Washington’s support, a number of leading officers of the Continental Army founded the Society of the Cincinnati.  It continues to this day as the oldest military hereditary society in the United States.

Unfortunately, there are few people like Washington and Cincinnatus among us.  Many leaders are ruled by their egos instead of their brains, and they don’t know when to get out of their own way.  We have all been saddened by the spectacle of once-great men and women who did not know when to gracefully step off the public stage, and, instead of being remembered as great leaders or scholars, are remembered as “the one who was always taking about the good old days,” or “the old judge in the wheelchair who always fell asleep during the arguments.”

Don’t let that happen to you!

Even if we could continue with mental and physical powers unabated (and, face it, no one can), when we hang on too long we risk becoming irrelevant.  Change is inherent in all human things.  Organizations, like people, grow and evolve.  Many ideas that once were considered revolutionary become the norm.  If you stand in the way of progress, you’ll be run over by the bus of the future.

« Change Happens!
Christmas on a Canalboat »