In a pamphlet called “The American Crisis” Thomas Paine wrote, “These are the times that try our souls,” and although his words are more that 200 years old, they ring true today. Paine’s crisis was the impending War for Independence, which would forever change American society as well as the world at large. Our crisis is a pandemic, which, whether we like it or not, has the power to forever change American society. 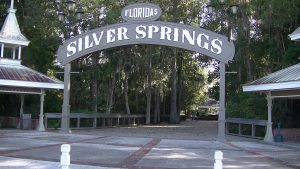 The almost-deserted entrance to what was once one of Florida’s greatest tourist attractions.

In 1924, two men, W.M. Davidson and Carl Ray, perfected the idea of glass-bottom boats. They acquired the rights to an area around Silver Springs, Florida, and began developing one of the first tourist attractions. Hollywood discovered the crystal-clear water if the Springs in the 1930’s, and the cameras moved in. Six Tarzan movies were filmed there, along with such classics as “Creature from the Black Lagoon.” Television brought more members of the entertainment industry, with television shows such as Sea Hunt in the 1950’s.

By the 1960’s, some entrepreneurs heard the drumbeat of approaching amusement parks, and ABC-Paramount bought the property and added rides and amusements. The race was on. In 1978, they built “Wild Waters,” and created an all-day fun-filled place with a wave pool, multiple water slides, a wading pool for the kids, a gift shop and the inevitable concessions that kept the ‘burgers and ‘fries coming. It worked–briefly. 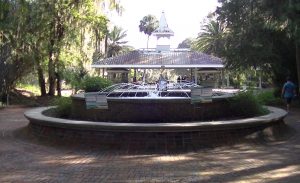 The fountain beyond the entrance once served to divide the crowds of people heading for the ticket booths and six entrance gates. Today, all but one of those gates is closed.

And then came Disney . . . and Universal, and Sea World. They presented an entirely new concept–a planned “destination” that would keep entire families entertained, fed, and housed for days at a time. Within 20 years, Silver Springs was in real trouble, and so was nearby Cypress Gardens, once the “Water Ski Capital of the World.” By the end of the first decade of the 21st century, both parks were gone.

In 2013 the Florida Park Service merged all that remained of the original Silver Springs with the adjacent Silver River State Park and created Silver Springs State Park. Acres of empty, weed-strewn parking lots and vast stretches of green lawn greet visitors to a quiet central Florida retreat that once was a bustling tourist attraction. The nearby Cypress Gardens Adventure Park, which featured even more rides and thrills, closed for good in 2009.
What caused their demise?

A famous person once said, “change is endemic in all human things,” and, surely, that need for “change” was part of the problem. But change for the sake of change was not enough; a lesson which both of these attractions learned the hard way. Water slides and roller coasters could not compete with a whole new way of thinking that was introduced by the Disney “imagineers.” 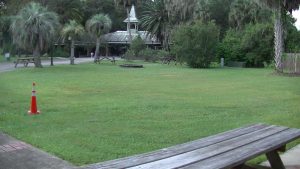 Many of us are involved in “clubs” of one kind or another. We belong to everything from yacht clubs and power squadrons, to social clubs and professional associations; we belong to country clubs, bridge clubs and even Scrabble clubs.  They all depend on meetings in one form or another, and they all exist because we human beings feel an inherent need to “get together.” What will happen to those clubs when, because of the current crisis, we are unable–or unwilling–to fulfill that need for an extended period of time? Will Zoom forever take the place of flesh-and-blood contacts, or will we find other ways to satisfy our instinctive need to gather? Are the “good old days” of friends and families playing Scrabble or Monopoly around the dining room table about to return?

If our clubs and associations are going to survive the current crisis, we must be our own “imagineers.” We must think outside the box and view our lives from an entirely new perspective. It’s easy to see the alternative; just take a look at the empty parking lots and deserted lawns of the once-famous Silver Springs.