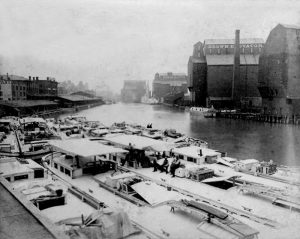 It’s snug and warm in the cabin of her canalboat; and as for housekeeping, the woman is a genius. There are about twenty of these boats wintering on the canal at the foot of Erie Street. They lie side by side, adjacent to one wall.  Constant passage of the fireboat through the winter means the waterway must be left open, so a rule forbids jamming the canal with boats from side to side as in former days.

I knocked on the door of the stormshed, which is raised above the hatchway going down into the cabin.  The canal people are hospitable to visitors from town, although they sometimes lie alongside one another a whole winter without ever becoming neighborly.  But another thing is noticeable–a whole family may have to walk over the deck (which would be over the roof of a house) of another’s boat all season, and they keep it up without so much as an unpleasant word and in fact with the most friendly relations throughout the time.  Perhaps there is something about life on the water that makes for peace of the soul and forbearance in small things.  Think of a family in town using another’s veranda all winter, without any return.

Along the shore there rise the big buildings with their groaning engines and humming machinery, while teams go back and forth along the towpath.  As long as the water is low or the storm shed is down on the boat, she lies still as the water in the canal, but when the water rises or the wind sweeps against the shed, she groans and rocks and creaks against her moorings.

The gray-headed matron who is the owner of the boat invited me down into the cabin.  She is also the manager, her husband having died some years ago.  The cabin is the living-room, sleeping-room, dining-room and kitchen for the whole family.  Amidships are the hatches leading to the hold where the grain and freight are stored.  Away beyond in the bow are the quarters of the canalmen and the mules.  “And,” declared the head of the family, “there’s not so thick a partition between ‘em in nature.”  Then she went on in a confidentially injured tone, “People think the canal people are all of the same stamp.  They’re mistaken.  The canalmen work on the canal because they can’t get anything else to do.  They can always get a job on the water.”

Her house was as clean as could be.  It was a space just the width of the ship and about square.  The steps were covered with oilcloth and so was the floor.  In one corner was the kitchen with moveable doors that slid back and forth, shutting the little corner when need be.  Right overhead was the opening for ventilation.  Across the end was a bunk and at either side a was another.  Each bunk had a set of drawers filling the space under it.  Every little cranny and irregularity in the ship’s sides were filled in by a cupboard or locker, and the household necessities and the clothing of mother and son and daughter were stored away in them.  Everything was neat and in its place.  One cranny, curtained off, held the family sewing machine.  And under the stairs (the tops of the steps opened like boxes) were the rubber shoes and boots of the family.  A red damask covered the table and an evergreen wreath decked with red bows hung about a plate of baked apples that was set to cool on the dresser.  They were a Christmas treat for her family.

“Once we got frozen up in Fort Plain,” explained the woman.  (Ed. Note: Fort Plain, NY, is approximately 62 miles west of Troy, and 234 miles east of Buffalo.) “The people were good and kind to us and there was plenty of stores around to keep in groceries, so it was as good as anywhere else.” 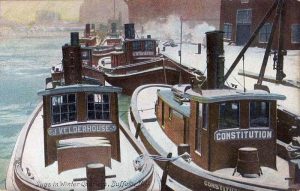 “There are three classes of boats,” she explained.  “It all depends on the age.  “Some of ‘em go on for 30 years without showing old age, but most of ‘em are worn out after fifteen or sixteen years.  A third-class boat most always carries corn and such things–no wheat.  And when she gets all played out they cut out her decks and make her into a coalboat.  Yes, you get to know all the different kinds of boats and move around among ‘em.”

With the opening up of Spring the canaler looks about for a load, and in a good season he does not have to look long.  A commission-man happens to have a load ready, so the boat is filled with grain and stocked with provisions, and the trip down the canal begins.  In the early Spring, when the sun is just warm enough and the trees are all bursting into leaf along the water, when the moon shines softly down on an evening, “well, it’s something like a picnic some days,” the woman remarked, “but sometimes everything goes wrong.  Then you wish you were in any other business under the sun.”

Down to Troy the boat takes its slow course.  Every six hours the driver unhitches his horses or mules (the latter cost more, but are a better investment because of their superior endurance), the steersman comes along, and the bridge is put out for the tired animals to come aboard and the fresh ones to walk ashore and be hitched to the tow.  The men change watches at the same time, too.  Six hours off and six hours on is a canal mule’s time, and a man’s as well.  At Troy men and horses are pretty well played out, so the horses are stabled and a tug is hired to take the boat perhaps right through to New York.  It takes about four weeks to make the trip.

At New York there is always something doing.  The little boat may get lots of odd jobs during her stay.  There are ships to be loaded from the cars and the canalboat hires a tug and plies back and forth with grain for all parts of Europe.  Then the return trip begins.  Time has gone on and the weather has waxed warmer, and the ship is no longer laden down so that she rides low in the water.  So, in order to let her pass beneath the bridges, the awnings must come down from the deck.  The sun blazes down on the bare boards, and the cooking of the daily meal goes on in the very oven of a cabin.  The men who walk on the towpath swelter and swear and the steersman, perhaps, tries to drown his misery until the owner is nearly distracted and declares it is no picnic after all.

“Yes,” concluded the hospitable canaler, looking from the warmth of the stormshed across the snowdrifts on the decks that make the little floating community seem cosy and secluded, “there is a great difference between a canalman and a boat owner–don’t forget to say what nice people you met on board.”

« Advice for Leaders at the Year’s End: Exit Gracefully
A Blessing in Disguise »